UK v EU – which road hauliers are the best?

Alongside fish and energy, road haulage is probably the most talked-about market of 2021. Across the world, qualified and reliable drivers are increasingly able to name their prices. Across the EU, 400,000 drivers are needed to fill capacity, the US is seeing drivers offered up to $310 an hour and Britain is left with 100,000 vacancies as the exodus of EU nationals exacerbates a problem that has existed for years.

Post-Brexit, relations with old allies have become increasingly pugilistic, framed for the nationalistic audience and political expedience. The UK and some European hauliers are finding themselves caught in the crossfire. Cabotage has ended, EU procedures, championed by the UK as a member, are being applied to British carriers for the first time and drivers are loathing to take up the temporary visas HM Government have offered. Pressure on operators, particularly in the UK, is coming from all angles.

Elsewhere, fuel prices continue their seemingly uninterrupted march higher. At the time of writing, prices hit another record high of 148.84p per litre at UK pumps. With the GBP / US exchange falling consistently in recent weeks, fuel costs are likely to remain stubbornly high for the foreseeable future. Across the EU fuel prices are also rising to record levels as global demand booms post-pandemic.

Heading into what looks to be a fractious 2022, market analysts Plimsoll have compared the outlook for the UK’s 500 largest Road Haulage companies and compared their performance to the 500 largest in Europe. Are the UK’s lorry companies better prepared for the next 12 months or will the benefit of scale see their EU peers power ahead?

Based on the latest data available, we have examined some of the KPI’s of companies heading into 2022 to reveal which is better:

Plimsoll exists to help business leaders spot danger signs in their financial stability and that of their rivals and peers. Our model of analysis takes complex financial data and produces graphical ratings on the 500 largest haulage companies in both the UK and the EU. We rate every company as Strong, Good, Mediocre, Caution or Danger to reveal their ability to withstand shocks and disruption.

As the chart shows, the number of haulage companies rated as “Danger” in the UK is almost twice that of their EU counterparts. While a danger rating from Plimsoll does not equal corporate failure, it does warn of a weakness that needs to be addressed. 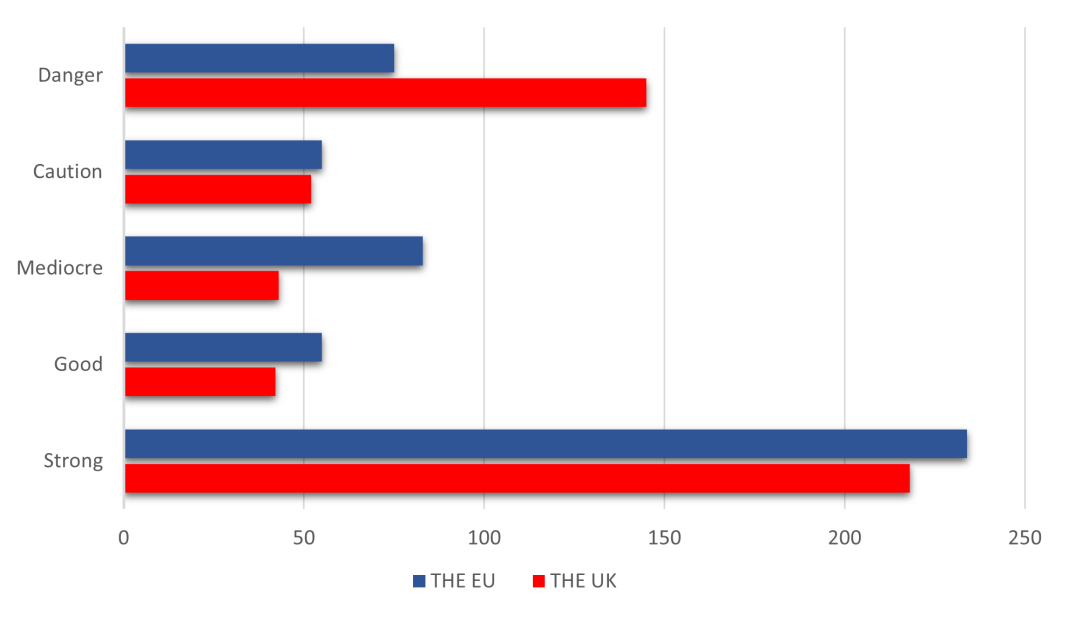 Many are the perils facing haulage across the whole of Europe but the fragility of UK operators leaves them more vulnerable than their continental counterparts. A collapse of the Brexit deal, the full implementation of the Brexit agreement, a re-emergence of viral disruption or another sizeable event could see more UK operators fall into trouble than EU equivalents.

Conversely, the number of operators rated as “Strong” is higher in the EU than in the UK. As the largest companies across the EU market are more stable and less vulnerable to future shocks, UK operators are left more exposed.

Growth patterns have been difficult to measure over the past 18 months in the midst of the global pandemic. While lorries have remained on the road throughout, demand was, of course, still significantly reduced as discretionary retail and hospitality remained shuttered.

However, as the following chart shows, growth among the UK’s 500 largest haulage companies has continually outpaced their EU equivalents over the past few years:

Does this indicate that the market share is more consolidated among the 500 largest operators in the UK haulage market than it is in the EU? Whatever the make-up of the market, the UK has maintained a growth edge before and during the pandemic. Will, that continue as the impact of Brexit on cross border transport becomes more apparent?

Haulage has long been a low margin, service-based industry. The capital- and labour-intensive nature of operating trucks while trying to service ever-changing consumer, ecological and political demands, makes turning a profit a perennial challenge.

In the UK, the post-Brexit landscape is one dominated by empty shelves and empty trucks. The political soundbites have lauded the bargaining power the scarcity of available drivers is generating. However, in a market with average pre-pandemic margins struggling to break 3%, the room for additional payroll costs without any productivity gains is tight.

The EU market is much more nuanced with differing fuel prices, regulations and wage patterns. However, with unfettered access to the single market and customs union, EU based operators still enjoy the benefits of cabotage and the ability to operate freely across the continent. However, as the following chart shows, the top 500 EU operators have long lagged behind their UK counterparts:

With a smaller landmass and a fully integrated motorway system, the UK returns consistently higher margins to its haulage firms. Will that profit premium last continued inflation and other rises in input costs. For the EU’s leading operators, the challenge is to ensure margins improve to match that of their UK rivals.

A lack of productivity is a problem successive UK governments have failed to fix. For every hour worked the UK averages US$105 of GDP generated. This compares to an average across the EU of US$108. But how do the UK and EU top 500 hauliers compare to the economic average?

Based on Plimsoll’s latest assessment of both markets, the EU is by some distance the most efficient. Revenue generated per person employed across the continent is around £170,000 (adjusted for EU / GBP exchange rate). However, in the UK the number falls dramatically to just £123,000.

There are exceptional pockets of performance among the biggest haulage companies across both the UK and EU. Again, performance in the EU is far higher than in the UK. As the following chart shows, the most productive companies in the EU are generating £357,000 sales per employee while their UK compatriots make just £191,000:

The productivity puzzle is one that continental operators seem to have much more control of. With the UK being subjected to ever more cumbersome bureaucracy as the Brexit agreement is fully implemented (or worse still collapses), the productivity gap could grow even further in the coming years.

The advent of automated delivery systems, electric vehicles and increased localized hub networks could be expedited as operators increasingly see humans as the weak link in the haulage chain. For now, EU haulage companies are streets ahead in the productivity race.

The result of the UK v EU road haulage debate can probably be called a respectable score draw. EU companies are much more financially stable and generate more from their human resources. However, the major UK hauliers make better profit margins and enjoy faster growth.

As we continue to journey through the post-Brexit, post-virus landscape these norms and trends could be buffeted again. Plimsoll provides the analysis to be able to monitor the performance of operators in the UK and the EU to help you spot opportunities and eliminate threats. Our intuitive, easy to use analysis will show you the operators that are suffering a decline in their financial stability, those that could be the best acquisition prospects and the companies that are driving the market forward.

Plimsoll is offering a special offer on analyses that cover the major companies UK and EU haulage market. For £999 (+VAT) you can have a special analysis looking at the current performance, future prospects, acquisition potential and value of the top 500 in each territory.

To purchase this special package, just email our team at sales@plimsoll.co.uk quoting RH/SM1 to take advantage of this unique package.